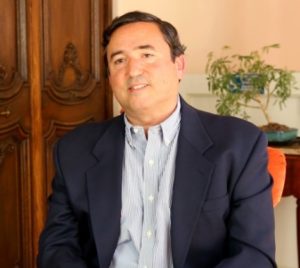 Daniel Vicario, M.D. is a medical oncologist and integrative oncologist. He was co-founder and medical director of the San Diego Cancer Center for over 15 years and medical director at the U.C. San Diego Cancer Center for three years until February 2014. Dr. Vicario remains the Medical Director and Director of Integrative Oncology at the San Diego Cancer Research Institute (SDCRI) which he co-founded in 1998. Dr. Vicario conducts research in the area of evidenced-based healing modalities to support cancer patients and Integrative Oncology in general. Dr. Vicario has received multiple recognitions and awards for his tireless and innovative support of cancer patients.

Dr. Vicario’s past professional career includes graduating with honors from the University of Buenos Aires, School of Medicine in 1983. He then returned to his native California, worked and studied Clinical Pharmacology at Stanford University Medical Center. This was followed by Residency and Chief Residency in Internal Medicine at the University of California Irvine (UCI) from 1985 to 1989. Dr. Vicario then specialized in Hematology/Oncology at the University of California, San Diego  (UCSD) from 1989 to 1992. Upon completing his specialty training, he remained on the Faculty at  UCSD as Assistant Clinical Professor of Medicine and has maintained a Teaching position since. His research interests and publications have focused on Immunotherapy of Hematological Malignancies, treatment of advanced Head and Neck Cancers, comprehensive therapy of GU and GYN  malignancies, Integrative Oncology and improving the quality of life of patients with cancer.

In 1996 the Integrative Oncology Program emerged at the San Diego Cancer Center (SDCC) and it expanded rapidly in 2004, under the San Diego Cancer Research Institute (SDCRI), with the help of dozens of volunteers, for which Dr. Vicario is deeply grateful. Dr. Vicario honors the community of patients and volunteers coming together to co-create such a successful Integrative program that benefited hundreds of cancer patients and their loved ones for over a decade.

Dr. Vicario is Board Certified in Internal Medicine, Medical Oncology, and Integrative Medicine and strives to incorporate all three specialties when caring for his patients. As a physician, he specializes in Medical Oncology and Integrative Oncology. For over three decades, Dan also studied, experienced, and practiced several ancient healing traditions including Ayurveda. He’s been a speaker at multiple national and international medical and scientific conferences.

Dan has served the San Diego community in a wide variety of non-profit health care related functions as a volunteer since 1989, including Medical Director of three Hospices for several years, Chairman of Cancer Committees, several Professional Advisory Boards, speaker for Survivorship San Diego since 1996 and board member of several nonprofit cancer organizations. Dan has also been the recipient of several awards. Dr. Vicario has been teaching for over 35 years. He feels that his patients are and have always been his real and true teachers.

Return to the Integrative Research page